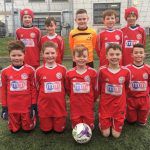 Congratulations to Milton of Leys Primary Junior 7’s football team who won the SSFA Highland Qualifier at Millburn Academy this afternoon to progress to the Regional Finals in Dundee.

The team played some superb football to win all 6 games scoring 18 goals and only conceding 2.

The Coaches were delighted with how the team performed stating “This was one of the hardest qualifiers we have had with the form teams in Inverness all drawn in this qualifier which makes the outcome even more satisfying”.

Good luck for the Regional Qualifier in Dundee in April against the qualifiers from Aberdeen, Perth & Dundee.